32.0K shares
The Best Funeral Potato recipe is a delicious way to make a cheesy potato casserole that your whole family will love!
Jump to Recipe Jump to Video Print Recipe 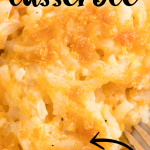 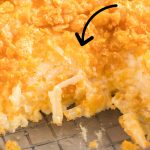 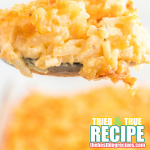 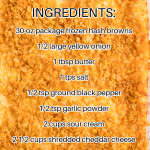 The Best Funeral Potatoes are a mainstay in some circles. If you're familiar the Mormon church (where they're also called Utah potato casserole), you might already know about them.

If you're not aware of them -- don't ever let a recipe name kill your appetite. The Best Funeral Potatoes are actually just a cheesy potato casserole.

They are so delicious that you'll want to devour the whole entire casserole yourself. No joke.

The recipe calls for things like butter, onion, sour cream, and cheese. You can cook it from scratch with no soup or use homemade soups or make a quick version with canned cream of mushroom soup. Versatile!

Topped with potato chips or Doritos.

Oven baked (about an hour at 375°), or cooked in the crockpot (on high, for about four hours). And, yes, you can make this ahead of time and freeze it, too.

Bake it at a slightly lower temperature for a couple of hours or until everything is bubbly.

I can't tell you how many times I've just wanted to pick up the entire dish and run with it and eat it all because they are so good.

Where did the name funeral potatoes come from?

Often after a funeral there is a tradition of the family regrouping for a meal after the graveside service.

Friends, a women’s church group, or a service club usually provide the meal. Funeral potatoes are easy to make for a large crowd and everyone seems to love them so they often make the menu for sizeable groups.

But…to make them more appealing, you could call the Best Funeral Potatoes something else. Sort of like that famous balcony scene when Juliet says to Romeo, “What’s in a name? That which we call a rose by any other name would smell as sweet.”

Whatever you call them, this creamy, cheesy potato casserole is a wonderful comfort food; you don’t have to wait for funerals to eat them.

The Best Funeral Potatoes are also enjoyed at potlucks, graduation parties, and family reunions. And this particular recipe has become a highly requested dish at our house.

How to make the Best Funeral Potatoes...

My current favorite is the recipe I’m sharing here, but it’s always fun to get adventurous in the kitchen and switch up recipe ingredients.

Here are a few modifications that also add flavor to this casserole that can serve as a delicious side dish or an entire meal.

LET’S EXPERIMENT!
A note on the potatoes: Everyone seems to have their favorite version but frozen and then thawed hash browns, diced hash browns, or tater tots are the top choices. You can also boil (with skins on so they don’t become too watery), peel, and cube russet potatoes. 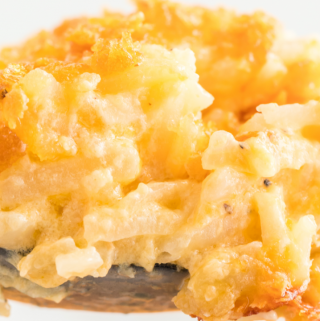 HERE ARE A FEW MORE DELICIOUS RECIPE POSTS YOU MIGHT ENJOY TODAY:

I'm Shauna and that's my daughter Bailey! I like to celebrate delicious food with simple ingredients that readers can easily recreate at home!